When it comes to automatic door sensors, there are two primary options that you can choose from: microwave sensors and infrared sensors.   But what exactly is the difference between these two sensors? And which would make a better door sensor?

These two types of motion sensors are the most common ones you’ll find in commercial buildings, and it’s not hard to figure out why– both work efficiently at detecting moving people and objects, and immediately opening automatic doors.

To answer these questions, let us first break down how each one works.

The infrared sensor works by measuring the infrared light radiating from the objects in its field of view. All objects with a temperature above absolute zero emit heat energy in the form of radiation. This radiation cannot be seen by the human eye, but can be detected by electronic devices like the infrared sensor.

The infrared sensor conducts an analysis of a room or surrounding areas, and looks for a change in infrared energy. Should it detect a change, such as the presence of a moving person in the proximity, it will emit a pulse activating the automatic door sensors, which in turn prompts the doors to open.

Infrared sensors are also known as Passive Infrared Sensors. ‘Passive’ here refers to the fact that these sensors do not emit or generate energy for detection purposes; they work simply by detecting infrared radiation emitted or reflected from objects.

The microwave movement sensor works quite differently to the infrared sensor. It applies the Doppler effect in that it sends out microwave signals and measures the length of time it takes for these signals to bounce off of surrounding objects and return to it. This echo time is what it uses to calculate the distance of stationary objects around it. It first establishes a baseline room or area analysis to detect the current distance of all surrounding objects. When something comes into the detection area thereby interrupting the microwave signals and altering the echo time, it perceives this as a change in distance from the object and this sets off its trigger.

Now that we know what the difference is between the two, it’s time to answer the question: which is better? The answer however isn’t clear cut:

So which sensor would be better for your automatic door? Generally, infrared sensors are more suitable for smaller, more compact entryways and well-controlled, indoor spaces, whereas microwave ones are good for large areas. But who says you need to choose anyway? How Retail Gates Can Help Stop Thieves in Their Tracks

Theft is a key concern for retail businesses around the world, statistics reveal that theft costs Australian retailers nearly $3 billion every year. Let’s take a look at some trends in retail theft, and how retail security gates can help supermarkets and other retail stores to deter thieves. 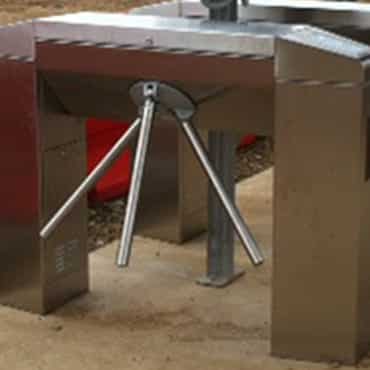 To ensure safety and compliance with QLD Coal Mine Safety and Health Act, BMA’s primary goal was to obtain a solution that would not only facilitate easy accessibility for the workers but also capture live data of personnel who had entered/exited the site. The TriStar turnstile system supplied by Rotech not only increased the efficiency of transporting personnel to and from the site, but also promoted a safer working environment by tracking and controlling mine access. Holding the title of the most photographed attraction in New Zealand, it witnesses 180 000 visitors per year. To control the movement of visitors and ensure security, they required an access control solution that was safe and easy to use. They chose Rotech’s Sentinel F90 Swing Gate because of its cushion soft safety and an anti-bump feature.